skip to main | skip to sidebar
Please bookmark us and check back. NOCBAC can be contacted by e-mail at the following address: MIKE@NOCBAC.ORG

Please join the Bicycle Tree at Hart Park in Orange for the Second Annual Pancake Breakfast. Meet really fabulous cycling enthusiasts, eat some pancakes, enjoy a little tofu scramble, and support the Bicycle Tree's efforts to spread the joy of cycling. The invitation below provides all the necessary details. Looking forward to seeing you all there. 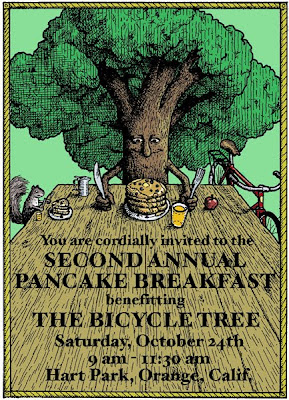 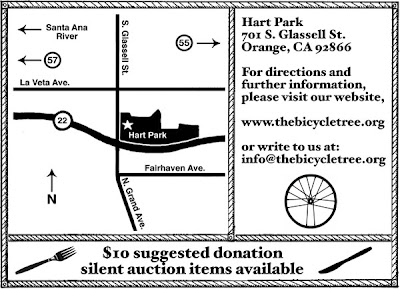 Two choices in N. Orange County for Ride Of Silence
BREA
and
FULLERTON
Posted by Mike at 12:38 PM No comments:

The Parks and Recreation Commission is being asked to review and make a recommendation to City Counsel regaring a proposed project to construct a paved pedestrian/bicycle route from the terminus of Puente st and Rosarita Dr and proceeding north to Puente st and Hermosa Drive.
READ THE PARK AND REC AGENDA WITH OVERVIEW OF PROJECT
Posted by Mike at 12:21 PM No comments:

Brea also having Ride of Silence

Join cyclists in Brea on May 20th for a slow-paced 12 mile bike ride. This world wide event is held in silence to honor those who have been injured or killed while cycling on public roadways.
For more info..
Put on by www.roadbiking.org
Posted by Mike at 12:22 AM No comments:

This Monday, the Santa Ana Planning Commission will hold a public hearing on amending the city's zoning code to require the inclusion of bicycle parking in new developments in a similar manner to how automobile parking is required.

This zoning code amendment would help residents from all segments of the city as it would make Santa Ana much more bicycle-friendly. This amendment is also in line with the rhetoric of our city's leaders to go green without creating a burden on businesses or developers. It costs more to purchase a business license in Santa Ana then it would cost to provide the proposed required bicycle parking. This amendment is also supported by the OC Chapter of the Sierra Club.

Because it is an amendment to the zoning code, the Planning Commission will vote on a recommendation on Monday and then it will ultimately be decided by the City Council. Your attendance at this Planning Commission meeting in support of this would be greatly appreciated.
Posted by Mike at 12:26 PM No comments:

Puente Link : A bridge of opportunity

The “Puente Link” is a ¼ mile, Class I (paved, off road) bicycle route designed to link the northern and southern segments of Puente Street across the Brea Creek Channel in northern Fullerton and adjacent Brea. This vital transportation link will provide a variety of opportunities for our community. Never has such a small project done so much for so many.
View a Google Map of the "Puente Link"
This bikeway was approved by the Fullerton City Council as part of a proposed Master Plan of Bikeways in the early 1990’s and has been part of the City of Fullerton’s General Plan since 1996. It has been at the top of the Bicycle User’s Subcommittee (BUSC) list of priorities for over a decade.

The reasons for that status are many: this short trail is a critical N/S and E/W link; it connects the isolated northern part of the city to the south; it links to other existing and planned Fullerton bicycle routes and creates a useful commuting route; and it provides access to many other bicycle routes in cities to the north of Fullerton. Further, there are limited safe alternatives to this route. Now, external funds have been acquired and are in place to build this route at no cost to the City.

There is some neighborhood opposition to this project. A number of concerns have been voiced all of which are easily rebutted or mitigated. However, our community must know that no City of Fullerton Municipal Tax dollars will be spent on this project. The bulk of the money comes from Caltrans and OCTA. This is money that is designated to be spent on alternative transportation infrastructure. It cannot be repurposed for any other project or program in Fullerton. Roughly 15% comes from the Brea Dam fund. This is money that must be spent on Brea Dam area projects.
The City Council needs to know that there is widespread support for this route. Please contact Fullerton Council Members (Bankhead, Jones, Quirk, Keller and Nelson) and let them know how you feel.

The email address for the Council members is council@ci.fullerton.ca.us

Also, please come to the special Meeting of the Parks and Recreation Commissions on May 18th at 6:30 in the City of Fullerton Council Chambers to lend your support.

If you would like us to update you on further development, send a note to
MIKE@NOCBAC.ORG
Posted by will at 8:13 AM 1 comment:

RIDE OF SILENCE May 20th Fullerton

Fullerton Ride of Silence will meet at 6:30pm near the downtown plaza on Wilshire between Harbor and Pomona FOR MAP at 6:30pm. We will ride at 7pm.

What:
The world wide Ride Of Silence™ bike rally

Why:
• to mourn those cyclists already killed by motorists
• to raise awareness (among motorists, police, and city officials) of cyclists on the road
• to have motorists know we only want to share the road we ride on
• to show that cyclists are not going away

THE RIDE OF SILENCE WILL NOT BE QUIET
On the third Wednesday of May, at 7 PM local around the world, cyclists will take to the roads in a silent protest of the carnage taking place on the streets.

Chris Phelan organized the first Ride Of Silence in Dallas in 2003 after endurance cyclists Larry Schwartz was killed by a passing bus mirror on an empty road.

The Ride Of Silence is a free ride that asks its cyclists to ride no faster than 12 mph for no longer than an hour, and remain silent during the ride.

The ride hopes to raise cycling awareness during bike safety month to motorists, police, traffic engineers, insurance companies, and city officials. The ride is also a chance to mourn, in funeral procession style, those who have already been killed.

The ride requests black arm bands be worn, red only if you have had a bike/motor vehicle accident. Helmets are required; bright clothing and lights are highly recommended for the ride home. There are no fees charged anyone to participate.

Phelan is looking for as many cyclists as possible to join in one of many locations in the US, Canada, Australia, Europe, South and Central America and the rest of the world. Last year there were over 300 locations in all 50 US states, and 18 countries including: Antarctica, Argentina, Australia, Bolivia, Brazil, British Virgin Islands, Canada, Caribbean, China, Costa Rica, Cyprus, Jamaica, Japan, Mexico, New Zealand, Panama, and Spain.
Posted by Mike at 9:52 PM No comments:

Labels: BICYCLE NEWS in ORANGE COUNTY, BIKE NEWS BICYCLE NEWS
Older Posts Home
Subscribe to: Posts (Atom)
ANY ONE CAN POST HERE If you would like to ad a topic please email me an edited version and I will post it. Thanks MIKE@NOCBAC.ORG

NOCBAC is a newly formed bicycle advocacy organization that seeks to promote a safe, enjoyable and convenient environment for bicycling in north Orange County. Our primary approach to achieving this goal is through making government agencies aware of the needs of bicyclists and of opportunities to make their communities bicycle friendly. In order to achieve this goal, we support projects that integrate cycling in local and regional transportation strategies, bicycle events and educational efforts. As we grow and evolve so too will our list of activities and accomplishments.
We are now comprised of a steering committee that meets monthly at Banning’s Bikes in Fullerton and an e-mail list of individuals who want to remain informed of advocacy activities and participate when needed. If you wish to join our e-mail list or participate in the steering committee. Please provide us with your name and e-mail address. MIKE@NOCBAC.ORG

IT JUST TAKES A SECOND AND RAISES FUNDS FOR NOCBAC

WE LOVE THESE OTHER BIKE SITES

WE LOVE OTHER WEB SITES TOO